But there is something weirdly inert about this film, a kind of diet or lite version of Steven Spielberg's Saving Private Ryan.


Plenty of cliches are not brought entirely back to life. There are French resistance soldiers wearing the regulation black beret and waistcoats: the stripy shirts and strings of onions appear to have been left at home. It is competently put together, but as with the other second world war film out this week, the nagging question is: what's the point?

The group of unknown actors do an excellent job of portraying the soldiers. Being a WWII buff I paid special attention to details of insignia, weapons, vehicles etc and must give the film high praise for authenticity.

Made in the backwoods of Utah, the producers managed to scrounge up German and American vehicles from collectors more even than Saving Private Ryan had managed to get and enlisted the help of World War II Recreationists as extras and for uniforms. According to the IMDB listing all the weapons were real, modified to fire blanks. So it appears the writers have taken dramatic licence here, though all the units mentioned were in the Ardennes at that time.

Of course, the story is complete fiction — it only starts with a real event Malmedy and shows how some soldiers escaped, but those that did made it back to friendly lines rather quickly as those lines were not very far away one account talks about a US commander on the other side of the town hearing the shooting! However in the film, much talk is made of how the friendly lines are a long way away. 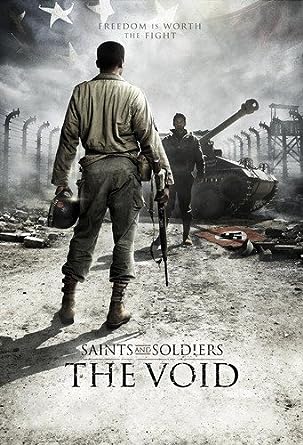 What discussions are to be had about God and religion are conversations you might expect between combat-experienced troops; soldier talk about what happens next, is there life after death, and holding friends in your arms while they die. In the end, this is a good, small war story told with heart and good intent. I very much recommend Saints and Soldiers to anyone with the slightest bit of interest to look up Malmedy and read about the events there, and see how the fog of war and various accounts can lead to so much confusion.

Here is an even-handed and long article on the massacre, the war crimes trial afterward, and the details as best as they can be collected.

As I started reading this article I grew concerned about the seemingly anti-Semitic bent on the first page, but further reading of later pages showed me it is quite an even-handed article. Here is an article written for World War II Magazine that examines the details of the actual event itself without going into the trial s afterwards.

skidlonina.ml However the first link above opens a door to so much more. At various points through the pages, there are links to other stories of atrocities — some committed by American troops, most famously at Dachau concentration camp where US soldiers executed a number of Waffen-SS prisoners. One branch was combat — the Waffen-SS.